The inner ear, which is deep inside of your skull can seem abstract and strange. We all know we use our ears for hearing, however it actually has a much bigger job than just hearing. We use it to keep us balanced, to help us walk in the dark, for spatial orientation, head position, and eye stability. All of this comes from a tiny, curly-shaped, organ in our skulls. Luckily, it actually can be simplified down to a few parts, so let’s break it down!

The ear, where the vestibular system is housed, is separated into three distinct parts. The outer ear (the spot we stick a Q-tip even though we know we shouldn’t), the middle ear (the part that pops on an airplane) and the inner ear (or the vestibular system, which helps us with everything balance and hearing related). You can see all of these parts in this picture below:

Each of these parts plays a vital role in hearing, balance, and daily function. Let’s review the three main parts.

The outer ear begins at the part you can see, the pinna, and ends at the eardrum, or tympanic membrane. The purpose of this structure is to collect sound waves and direct them to the eardrum, which helps to conduct sound to your cochlea in the inner ear. This structure is important to hearing, but less so for balance.

The middle ear sits between your eardrum and your eustachian tube. It houses the 3 ossicle bones that conduct vibrations to your inner ear so you can hear, and connects to your eustachian tube which is the part of your ear that pops when you climb elevation on an airplane. The job of your eustachian tube is to equalize pressure between your ear and the back of your throat. It is typically closed, but when you have a rapid change in pressure for any reason, it rapidly opens to equalize the pressure in your ears. When this doesn’t happen, it becomes quite uncomfortable and we can either intentionally equalize the pressure (frequently called popping your ears), or it may lead to a feeling of dizziness or lightheadedness. Because of the closeness in proximity, the middle ear directly impacts the inner ear, which is why dizziness and lightheadedness are so entwined with symptoms of your middle ear.

The inner ear is the innermost portion of your ear system. It is your vestibular system, it controls most of your balance, whether or not you feel dizzy, spatial orientation and many other functions. It consists of two distinct parts: the vestibular system and the cochlea. The cochlea is your hearing portion, and the vestibular system is your balance portion. Within the vestibular system you have semicircular canals and the vestibule. The signals from these systems are sent to your brain via your vestibulocochlear nerve. This nerve fires constantly at a consistent rate when you’re looking forward. If you look in another direction, the nerve signal is altered, so you always know where your head is in space. For instance, if you look to the right, the right vestibulocochlear nerve fires more than the left, and vise versa, until you look forward again.

The vestibule houses the utricle and the saccule, these two have tiny calcium-carbonate crystals, or otoconia, that react to linear movement. The otoconia are located on a gelatin layer; when you’re upright so are the crystals, and when you tilt your head forward, the crystals move forward with gravity. The same thing happens when you tilt your head backwards, the crystals slide backward. That same signal that is sent to your brain via the vestibulocochlear nerve tells your brain where your head is in space. 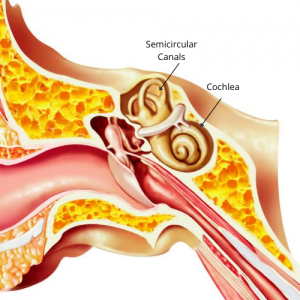 Lastly, there are the three semicircular canals: anterior, posterior, and horizontal. Each of these structures is positioned to detect angular motion, are filled with fluid called endolymph, and have a structure called the ampulla at the end. The anterior canal detects motion around the lateral axis of your head, like you’re nodding yes. The posterior canal detects motion around the antero-posterior axis of your head, which is the motion when you tip your head to the side or do a cartwheel. The horizontal canal detects motion around your vertical axis, the motion used when you say no. As you move at an angle, the endolymph moves, this causes the fluid to move toward or away from the ampulla and distort a structure inside, called the cupula. The movement of the cupula sends the final signal through your vestibulocochlear nerve to help you orient your head in space.

The inner ear is incredibly complex and it can be difficult to understand why this tiny structure is making you so dizzy. Now that you have a clearer understanding of the anatomy and physiology of your ears, hopefully you can gain some clarity about why your symptoms are occurring and begin to work toward diagnosis and treatment. 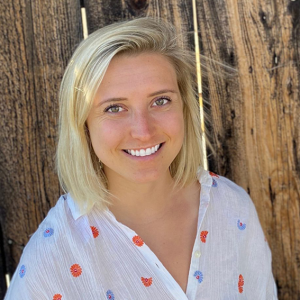 No no noooo!! This is not a treatment for anythi

Have you ever wondered what we do in client sessio